From Pittsboro NC to Roslindale MA; Jesse Greenlee was in search of something new and Tenacity had just what he was looking for! 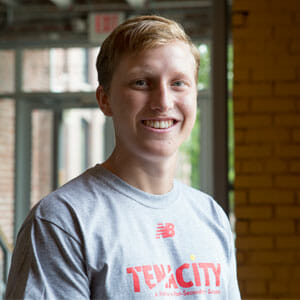 
One of the first members of the Tenacity team you notice when visiting the Washington Irving Middle School in Roslindale is the AmeriCorps community outreach fellow, 20 year old Jesse Greenlee, a small town boy from Pittsboro, North Carolina.

The son of Tim and Kathy Greenlee, Jesse has five sisters and two brothers, all of whom are older than he is. Growing up in such a big family, it is no surprise that some of Jesse’s favorite things to do in his free time don’t necessarily involve the accompaniment of others. Among his favorite activities are; running, hiking, riding his bike, kayaking, reading, watching his favorite movie (Forest Gump) or even playing the guitar. While some peace and quiet is nice, he is just as content socializing and just having a good time with his friends and family.

Family has always played a large role in Jesses life, and with that he shows deep compassion for others, something he credits to his mother and father teaching him and his siblings the importance of at a very young age. It is this compassion, along with something his father has always told him, that makes him such a great fit with AmeriCorps and especially the Tenacity team.

“If we have the capability to help someone, it is our obligation.”

These words were first spoken to Jesse when he would help his father with handyman work around their town and he began to question why they didn’t receive any pay in return. His father would always answer with “if we have the capability to help someone, it is our obligation.” From that point on, Jesse knew that no matter where he ended up in life, he wanted service to be a big part of what he did.

Given his upbringing, it should not come as a shock to anyone that Jesse landed at an organization that focuses on service and helping others. There are hundreds of these organizations across the country and the globe however, so what made him choose AmeriCorps and ultimately Tenacity?

The answer to the first part of this question shows just how much of an impact Jesse’s family has had on him. Two of his sisters did a gap year during which they worked with AmeriCorps or a related group around the country. Sara O’Brien, Jesse’s sister who is eight years older than he is, took a gap year while in college to work with homeless youth in Greensboro North Carolina. This time that she spent making a difference in the lives of others helped her realize that her heart was really in the field of social work which she then pursued a career in.

Jennifer Greenlee, who is just over a year older than Jesse, had a similar experience. After studying elementary education for a year in college, she decided that it wasn’t what she really wanted to do and so she began to seek alternative options. She quickly found FoodCorps, an organization that is part of AmeriCorps that aims to promote healthier eating in schools across America. Jennifer chose to work in New Jersey for her gap year and it completely changed her mind on her future; when she got back, instead of continuing with elementary education, she realized that she was really meant to study, and eventually have a career in, sustainable agriculture.

Upon returning, they both told stories of how amazing their experiences were and how much they learned away from a classroom. Immediately, Jesse could see what a genuine difference it made in both of their lives and he couldn’t help but be proud of the work they had done. Since then, he knew that he wanted to follow in his sister’s footsteps and take some time to help others just as they had.

At first glance, Tenacity does not seem like the most obvious choice for Jesse, but his desire to push himself to go out of his comfort zone mixed with his passion for impacting others is what makes it the best fit. “Tennis? Middle school kids? Boston? I had no experience with those and I didn’t really know how they would fit into my life’s path.”

This experience is filled with firsts for Jesse; Moving to Boston a few months ago marked the first time he moved to a state other than North Carolina, the most experience he had with tennis before joining Tenacity was just hitting around with some friends at home and other than the time he has spent with his cousins and family, he does not have any prior experience working with children.

Watching him interact with the various middle schoolers at the Irving School however, you would never guess that this is the first time he has worked with children in a professional setting. From the energy he brings on a daily basis to the way he receives respect from not only the kids but his colleagues as well, he seems like a seasoned vet.

One thing that Jesse says has led to his success with children is the fact that his mother is a teacher. Not only has he watched her make a connection with each and every student she has taught, she is also able to give him tips and ideas she has learned over the years. Being a teacher, no matter what the setting is is no easy task, but growing up learning skills from someone like Jesse’s mother and seeing the impact she has made on the children and community is a driving force in making Jesse want to connect with the children in any way possible.

Jesse hopes that his Tennis game garners as much respect as his ability to be a leader. While he may have come into this year a beginner, his tennis game is improving every day much like the students and he has a message for Burke Paxton, his friend and Tennis Coordinator at the Irving School “Burke, don’t get too comfortable. I’m Coming for ya”

Although Jesse is only a junior, studying Marketing with a minor in Outdoor Education at UNC Charlotte, he already has his sights set on doing another AmeriCorps program after graduating and then, hopefully the Peace Corps. Jesse’s plans for the future can be credited to two things; he does not want to sit behind a desk while there are people in this world that he could have a positive impact on, and the short amount of time he has already spent with Tenacity has opened his eyes even more to the power of compassion. “I really like the fact that I am working with a younger generation of people that I will be able to impact and influence in a positive way.”

With everything going on in America and the world today, we could use some more people as selfless and dedicated to service as Jesse, so can we count on him to recommend this experience to others?

“Undoubtedly, I would recommend AmeriCorps, Tenacity, or any form of service to others. Get a change of pace, help others, grow as a person, and enjoy yourself.”