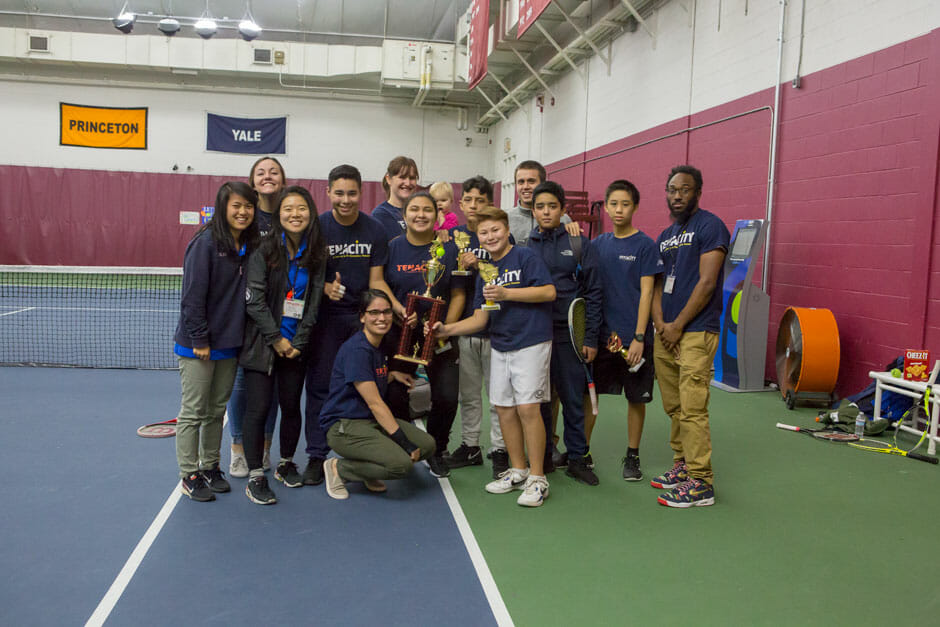 By: Drew Hendrickson, Director of Tennis, Fitness, and Summer Programs

2017 ends with the Mario Umana Eagles hoisting the championship trophies, and 2018 will begin with the Eagles perched atop the MSTL power rankings. The Eagles won both the 2017 Rising Stars and Holiday Classic tournaments, in an unprecedented display of MSTL dominance.

At the Rising Stars, 6th graders Marissa Hernandez and Rafael Gomez led the Eagles at 1st doubles. This duo made the finals, and their teammates Luis Evora and Omar Pleitez won the 2nd doubles championship. Tally up their points and you’ve got a Rising Stars Team Champ on your hands.

“That success comes from getting 6th graders to rally with each other, putting an early emphasis on point play,” explained Head Coach Mike Dolph, who has Umana practices running like a well-oiled machine.

The Umana put up similar results at the Holiday. Two of their three doubles teams won their flights outright. Robert Kubinec and John Le overcame the Curley’s Brennan Shapiro and Rain Twohads in a great final at 1st doubles. And Gabriel Soriano and Ana Ventura won the 3rd doubles flight.

“Success at the Holiday came from the whole 8th grade class,” said Coach Dolph. “Everyone, not the just the ones who played, did a great job pushing each other day in and day out.”

Overall, the Eagles turned in a historic performance. In scouring the annals of the MSTL, your scribe has yet to uncover a year when the same team captured both the Rising Stars and the Holiday.

Second to the Umana in the 2018 power rankings is the Curley. The Flying Lions came in second at both tournaments. They narrowly missed the Holiday and they contended for the Rising Stars, winning the first doubles flight with Angel Martinez and Nicor Lawton leading the way.

At the Holiday, the Curley worked their way into the finals of both the 1st and 2nd doubles flights, putting themselves in a great position to win the event.

Stiven Birenbaum and Jeremiah Sanchez represented the Flying Lions in the 2nd doubles flight, and their final was probably the match of the year.

Bolstered by Stiven’s aggressive forehand and Jeremiah’s consistency, the Curley reached the precipice of victory. The Washington Irving’s Rafael Diaz responded to Stiven’s forehands with reflex volleys that seemed to get better as the points went longer. Anything Rafael couldn’t reach, fellow 8th grader Shakeem Richards was able to chase down and keep in play. So the match see-sawed back and forth, until both teams had reached the brink. On mutual match point, and with the entire Murr Center transfixed on each stroke, Rafael kept several volleys in play until Stiven ripped a forehand that caught the top of the net. The Irving took the win, and with it their first flight championship since rejoining the MSTL as an expansion team in 2015.

With losses in both finals, the Curley came up just short, ultimately losing to the Umana 42-40 in total points won.

If anyone can turn frustration into motivation for next semester, however, it’s Coach Payne Schanski. You don’t need a Ph.D in MSTL history to remember that the Curley bounced back from last December’s near-misses to capture both the Staniar and the Crane once May rolled around. Don’t be surprised if Coach Payne has his wolves hungrier than ever come spring.

The Irving Warriors are third in the power rankings.

Led by a strong 8th grade class, the Warriors had a great showing at this year’s Holiday Classic. In addition to winning the 2nd Doubles Flight in the aforementioned match of the year, the Irving’s Palomin Brothers earned a spot in the 3rd doubles final as well. Joe and Damian finished as finalists in the flight, but their energy and effort inspired the entire team. On one insane point, Damian dove for a ball, got it in the court, recovered to his feet to chase down several more shots in the rally before finally losing the point. This type of effort exemplifies the passion of Warrior tennis.

As if they needed more motivation, the upcoming spring season will be the Irving’s first without departing Site Director and former Head Coach Tristan Norbert. Norbert built the program from the ground up and deserves much credit for the team’s current success. We wish him all the best in his new adventure, but we know the Warriors will strive to play up to his high standards this spring. If they do, they might see their school’s name engraved on the hallowed Crane Cup.

Rounding out our power rankings are the Lilla G. Frederick (LGF) and the McCormack Panthers. Both of these teams have the talent to make some noise in this league, and did just that at our winter tournaments. Both, however, need to develop greater depth and consistency on their rosters to take home some MSTL hardware.

For the Frederick, great strength resides with their 6th graders. At the Rising Stars, Josh Perez and Wilden Figueroa qualified for the final in the 2nd flight, and Jason Deshormes and Jayvon Fuqay just missed the final at 1st dubs. With these skilled younger players and a strong crop of veterans, the LGF has everything they need to climb the rankings.

One main question they must address is simply how to get on the courts more. Playing just twice a week hamstrings the Panthers, but every team faces challenges. In fact, each MSTL season is really just a story of how each team overcomes obstacles, both foreseen and unexpected, to achieve their goals.

That same story plays itself out every day at the John W. McCormack. Early morning classes for 7th and 8th grade are challenged by random students walking through practice. Afternoon practices for the 6th graders are usually displaced into the cafeteria. But if you look to team leaders like Jomar Baez, Endy Ventura, Hallie Gomez, Shaleeca Joseph and Emmanuel Georges, they won’t list excuses, they’ll see opportunities.

The McCormack’s performance at the Rising Stars will be a ray of optimism for the Panthers as Isaiah George and Victor Batista qualified for a play-off in the 1st doubles bracket. They lost the tie-breaker, but being so close should light a fire in them as they take aim at the spring season.

The McCormack also fought hard at the Holiday Classic making serious runs in both the 1st and 2nd flights.

All in all, it was an excellent fall season in the MSTL with more suspense to come as the drama of this season unfolds in the spring.